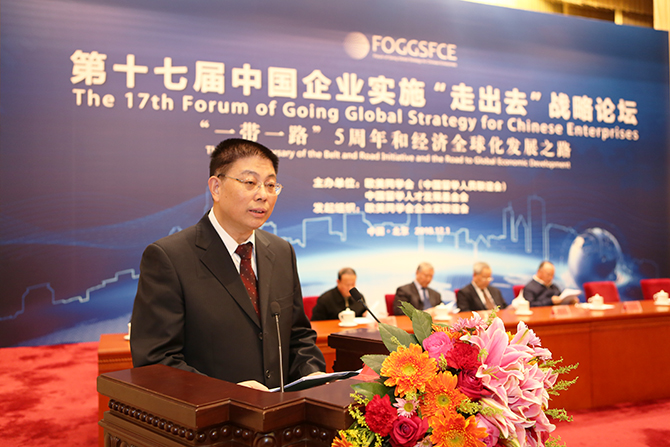 On behalf of the United Front Work Department of CPC Central Committee, Vice Minister Dai Junliang expressed congratulation to sponsoring units of the forum in his speech. He pointed out, the forum is themed on ‘The 5th Anniversary of the Belt and Road Initiative and the Road to Global Economic Development’, and it aims to discuss the cooperation in fields such as ecological environmental protection and intellectual property rights, under the implementation of the Belt and Road Initiative”. He added “It has significant practical meaning for increasing the openness of China”.

Vice Minister Dai Junliang said “the globalization of Chinese enterprises will usher in a broader prospect by considering the 5th anniversary of construction of the Belt and Road Initiative and the 40 anniversary of China’s economic reform and opening up as new starting points”. Afterward, Vice Minister Dai Junliang puts forward three advices regarding globalization of Chinese enterprises. Here are the three advices:

Firstly, Chinese enterprises need to tell a good story during the course of globalization.
Vice Minister Dai Junliang encouraged representatives at the forum to fully demonstrate their open personality, open temperament and open mind. Those representatives were encouraged to take the initiative to accommodate the interests of other countries and carry forward China’s excellent traditional culture while develop their own businesses. They were also encouraged to make contribution to China’s commitment to peaceful development and cooperation for mutual benefits.

Vice Minister Dai Junliang said “the forum of “Going Global” strategy for Chinese enterprises has become an important brand activity for promoting overseas development”. He added “It also contributes to the promotion of transnational exchange and cooperation between Chinese enterprises and foreign enterprises”.  Near the end of his speech, he suggested Western Returned Scholars Association and COSDF to continuously lay foundations and build platforms for cohering and absorbing more overseas-educated scholars to participate in the construction of the “Belt and Road” Initiative.

(Edited by Publicity and Liaison Department)